Flo1 is rapidly nearing its production phase. After a period of intensive tuning and optimizing, it was time to call in our design partner Hugh Welbourn. Hugh is the inventor of DSS (Dynamic Stability Systems), the foil setup that is used on the Flo1. He came over to the Netherlands to inspect the first singlehander equipped with DSS. After all: “There is nothing like seeing a boat first hand.”

Hugh has always been interested in hydrofoils, how they worked and why they worked. He did a lot of experimenting and built a lot of foils for other people. “It is great when you can move from the stage of having something on your desktop and analyze a foil, combine it with practical experience to a point where you can make real differences and improvements to boats.”, Hugh says. 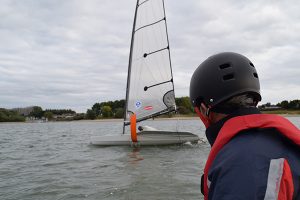 The experienced designer has never really been interested in production boats. His focus has been on working on ‘something new’ instead. “I have always wanted to move the game forward. That has always been the fun side.” Taking on the challenge of making hydrofoiling available to a larger group of sailors by co-developing a foiling dinghy proves that mindset. “After we had been getting going with DSS it all seemed a natural progression to move into doing this little boat. Obviously the Q23 has been a pretty successful first attempt at a flying boat. But the market is looking for smaller, more affordable boats and to be able to go sailing and flying easily. And safely. That is quite the challenge, since you’re moving into a different realm of speed.”

Hugh’s experience has been invaluable to the Aeronamics team. He was involved in the design concept of the final prototype. “We laid out the overall shape together – I left the details to Jurian.” While sorting out the details, Hugh was a reliable sparring partner in tackling technical challenges that the team came across.

Mid October, the moment had finally come where Hugh came over to see the Flo1 from up close. “There is nothing like seeing a boat first hand. And sailing it. You see far more from when you’re watching a boat on the water actually sailing than watching a video of a boat doing the same thing. There’s so much more going on. You can look at little things and make much more sense of what you’re seeing. The foiling business is quite complex – there’s a lot of factors involved. We try to separate the important ones out from the less important ones in order to move the whole structure of the project forward. That’s the reason that I’ve come here at this time.”

Not surprisingly, sailing Flo1 felt exactly as expected. Hugh used to work for David Thomas, who taught him a rather 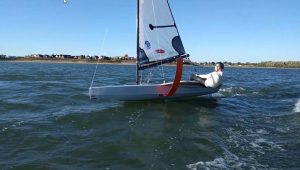 useful lesson.  Thomas used to say: “You shouldn’t ever design a boat until you can sail it in your mind first.” Thinking about how the boats should work first has since been a key aspect of Hugh’s design process.

Sailing the boats is also an important part of the job. Hugh says: “You have to be able to look at it from both perspectives. I’ve done a huge amount of sailing and designing, but the sailing lets you understand what the design needs to achieve, which is the tricky bit.” Therefore, he thinks a good designer should be able to sail as well.

The days spent around the Flo1 have been immensely valuable for Hugh and for the progress of the project. In just two days we were able to achieve more than in weeks of communication by phone or email. Hugh concludes: “It is coming to a stage where we understand what the boat can do at the moment. We know how to improve it – the next stage is to take everything we have learned so far and move it forward closer to a production model.” 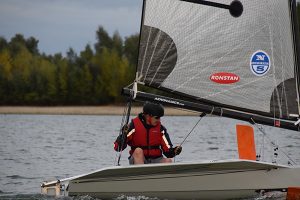 Hugh previously wrote a blog about the development of Flo1. Read it here.