It has been two months since the third and final prototype was completed. We are intensively testing and optimizing the boat to improve foiling balance, ease-of-use and durability.

Already during the second test, a big increase of wind speed resulted in spectacular speeds and a thorough test of foils, sailing balance and the rig. The strong breeze came earlier in the test program than expected – and planned –, but i t confirmed the strength of critical parts of the boat.

Testing has all been about gaining experience. Little mistakes can ruin a test run. For example, forgetting parts or tools can easily cost you a lot of time. Sometimes acrobatics are needed to perform quick changes on the water. For example, capsizing and lowering the mast on top of the support boat for quick rig tuning. “Just to tighten the stays?”, the frightened non-sailor and camera man asked. “Yes, just for tensioning the stays. And it sails and looks much better this way.” Something he couldn’t understand.

All in all, testing has led to high adrenaline levels, spectacular sailing runs and improvements in foiiling behavior. The first take-off made the foils hum and sing producing the familiar high tones caused by fast moving water. 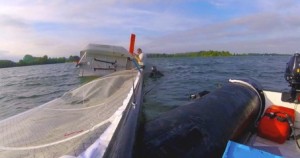 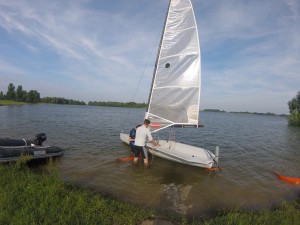 We aim to sail once or twice a week, making big modifications – if needed – during working days. The availability of a prototype workshop including a CNC-machine helps a lot to make big steps in the process.

We are currently performing tests with two different mainsail sizes. Various modifications have been made to the mast and boom height. Tuning the foils relative to crew size has appeared to be quite a task. The goal that we set – an easy-to-sail boat with a self-balancing ride height – is a big challenge. It requires a lot of time on the water to tune the foils to get to a (semi)fixed foil setting for various crew weights. The foil control fittings are currently in their fourth revision.

Sailing in a new speed range sometimes results in surprises. For example, high-speed sailing with the mainsheet tail running through the open transom results in a mainsheet that cannot be eased, due to the drag the sheet is creating on itself. That is just one of the little challenges while sailing witih a small boat at really high speeds. Of course we will make a provision to avoid this happening.

When a less experienced colleague reached the thrilling speeds for the first time he briefly explained the feeling: “I don’t know where to look or what to think, everything is happening so fast!” It is impressive to make the lake look small and at the same time lose your feeling of speed and distance.

The process of developing the boat has been great so far. Spending time tracing parts, designing new items and details reminds me of my days working on the ABN AMRO Volvo Ocean boats and other demanding projects.

Working together in a close team really with a highly skilled and talented team creates an innovative atmosphere. It makes me proud to be a part of the project. In the end nothing beats a good test with a product that you created with your team.. From design, to tooling, to the prototypes, it has all been very satisfying. And I am sure it will lead to a great product in the very near future.